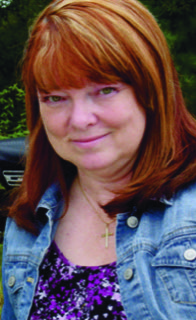 Diana L. Sharples lives in north Georgia with her husband and daughter, and a house full of rescued pets. She wrote her first teen novel at the age of thirteen. Although she holds a degree in communication design/illustration from the Atlanta College of Art and has won awards for her work in science fiction and fantasy illustration, she never lost her love for storytelling. In addition to infusing her illustrations with narrative, she penned several epic-length fantasy novels. As her daughter was entering her teen years, Diana refocused her writing efforts on contemporary young adult fiction. She has won several pre-publication awards in that genre. Her debut novel, Running Lean, was released from Zondervan Books (a division of Harper Collins) in 2013. After a battle against breast cancer, Diana is resurrecting her career with the sequel, Running Strong, along with the first in a new series, Finding Hero, She is also independently publishing a series of short YA mystery novels, the Because…Mystery series, in 2018. Diana is a motorcycle enthusiast and can be found riding her Harley around the foothills of the Appalachian Mountains.

Welcome, Diana. It’s lovely to have you here.

Hey, Sandy! Thanks again for this opportunity.

Now, we’d all love to hear more about your books, but first I have three questions for you so our readers can get to know a bit more about you. First, what inspired you to become an author, and how old were you at the time?

I was an imaginative child, sometimes to the frustration of my parents! I created imaginary characters and pretended to be them. When I was thirteen, I wrote my first full length novel. It was pretty awful, but a clear foreshadowing of what I would do later in life. I also drew pictures. All… the… time! My favorite novels were animal stories. Lassie Come Home. Call of the Wild and White Fang. When I was in my early twenties, a friend caught me rereading White Fang, and she questioned why I would want to read about animals. She handed me a copy of The Hobbit. At first I thought she’d gone crazy, since it was clearly a children’s story (while White Fang is, ahem, a classic!). But after a few chapters I was hooked. Then came The Lord of the Rings, and Narnia, and a host of other fantasy novels. I got caught up in the sub-culture of speculative fiction, writing an epic length elf novel and striving to become a cover illustrator. Even winning awards for my paintings. And then I had an encounter with Jesus Christ and turned my daily focus on Him. When my daughter was about eleven years old, I saw a distressing news article about teens on television that caused me to worry for the world my only child was about to enter. I prayed for a way that I could protect her… but God had another plan. That day—although I hadn’t written any fiction for more than four years—I had the characters, setting, and basic plot for a contemporary young adult novel. After an extended period of growth as a writer and going through the stormy publishing atmosphere that often had no place for what I was writing, I found an agent. A publisher. A future. The industry continues to have stormy periods, but I’m still here. Doing what I love.

And the world is no doubt a richer place because of what you’re doing! Now, next question. Where are your books set? And have you been there, or spent significant time there?

All the settings are fictitious but inspired by actual places. This allows me to shape the characters’ world in a way that best suits the story, without having to worry about getting something wrong. Running Lean and Running Strong are set in rural North Carolina, in the agricultural area around Rocky Mount. Although I created a fictitious county (Stiles County), I wanted the setting and the characters in it to be as authentic as possible. Thus I have made numerous trips there (500 miles from where I live!), and have met good people along the way, some of whom have become good friends. I was also welcomed as a guest to the Jimmy Weinert Training Facility in Maysville, NC, and the folks there made me a believer in the sport of motocross. Finding Hero was originally in the same setting, but those publishing storms I mentioned forced me to change a lot in the novel, including the setting. I chose somewhere closer to home but with the same rural/agricultural feel. Andrews, NC became my inspiration, and with it, the potential for diversity in my characters. Of my two protagonists, the male character is a member of the Cherokee nation. Again, I made a good many research trips—the closer setting allowing me to be home in time for dinner. And I met some wonderful people who helped me to get the details of Cherokee life right. The Because… books are set much closer to home, inspired by the Atlanta suburban town where I lived before moving myself to a more rural setting. So… yeah. I’ve been there a lot!

Wonderful!  I’ve been to North Carolina, many years ago, and have fond memories of the beautiful countryside. Now, lastly, do you write from your own experiences, or do you simply sit down and make stuff up?

Both! I don’t think it’s possible to write a novel without tapping into personal experiences, even if you don’t spell them out just as they happened. I connect with what my characters are going through because I too have experienced grief, heartbreak, fear, guilt, determination, dreams and nightmares, physical pain and great joy. I may never have bungie jumped off a bridge, but I have ridden with the wind in my face through the clouds touching the mountains along the Blue Ridge Parkway. I might never have tearfully sung a love song under a spotlight, but I’ve longed for something that seemed impossible and chased down the dream until I finally touched it. These emotional experiences connect me to my characters, and my characters to my readers, because the emotions are universal, even if the circumstances are not. So, I can sit down and craft a story, write an outline of what happens, analyze the goal, motivation, and conflict of each character, make charts of all the suspects and their opportunities and alibis, but the emotions come in after the planning, and they are what bring the story to life.

Sounds like you have a firm handle on your characters, so I bet your stories are full of emotion. Now that you’ve got everyone interested, let’s hear a little more about your books and where to find them.

The novels, Running Lean, Running Strong, and Finding Hero were written from a Christian worldview, and are written to be read by high school aged teens and up. While they contain issues related to realistic contemporary teen drama (eating disorders, dating issues, bullying, conflict with parents, etc.) they are all “clean” fiction and do not contain highly offensive language or graphic sex or violence. The Because…Mysteries series is also clean, but is more general market fiction. These books would be fine for high school teens who are Christian. All the books (except for Finding Hero, at this time) can be ordered as print books through most online and in store retailers.

The ebooks are available only through Amazon, and can be read for free through the Kindle Unlimited program.

But you can also find me on my website, dianasharples.com