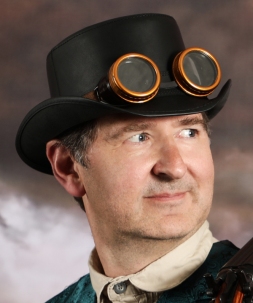 Today I’d like to introduce fellow CIR author Guy Worthey, with a new release – Ace Carroway Around the World.

Wyoming native Guy Worthey traded spurs and lassos for telescopes and computers when he decided on astrophysics for a day job. Whenever he temporarily escapes the gravitational pull of stars and galaxies, he writes fiction. He lives in Washington state with his violinist wife Diane. He likes cats and dogs and plays keyboards and bass guitar. His favorite food is called creamed eggs on toast, but chocolate milk is a close second.

You’re obviously into Steam Punk, Guy, so you must get to New Zealand one day. Oamaru claims to be the Steampunk capital of the world I’ve been there, and I don’t doubt the claim is true! Now, before we learn about your books, I have a few short questions.

If you could tell your younger self something you know now, with respect to your writing career, what would it be?

In two words, it would be, “Write more!”
I didn’t publish my first book until I was fifty-two years old, and I really should not have waited so long. I was and continue to be an introvert, like the majority of writers. As a youth, I did write some short stories and submitted them to Analog, a periodical devoted to science fact and fiction. I was rejected, of course, but give me that time machine and I’d head back in time and do some serious pep-talking because writing is fun. It’s fun even if nobody publishes it, but publishing is a terrific hoot.

What are the best and worst things about being an author?

Best: writing.      Worst: editing.   I bet all the authors say that. On the interface with the outside world, however, I’m really torn by the childish need to seek approval and the introvert’s instinct to just hide. So, on that axis, the best thing is the good review and the worst thing is the bad review.  Finally, on the axis of coffee:   Best: coffee.   Worst: coffee runs out.

Where is the best place in the world to write?

By a window overlooking the storm-lashed seaside cliffs of Scotland. I imagine. I’ve never done that, actually. I do have a window, though, and I try to sit by it even if it is far, far from Scotland. In terms of tools, I enjoy typing on a keyboard to write, to minimize writer’s cramp. When reading, however, I prefer the traditional technology of ink on paper pages held together with binding.

Do you write from your own experiences, or do you simply sit down and make stuff up?

I make stuff up! I mean, obviously there is personal experience involved. I rely on my observations of human nature for characters, my travels for geographical inspiration, and my science side for the technical aspects of writing. But by and large most aspects of the Ace Carroway stories are things I have dreamt up. I sometimes start with particular cinematic scenes I want my characters to inhabit, and other times I start with a pair of characters who are clearly on a collision course. I do a fair amount of character building exercises, such as pretend interviews with my characters. I find characters to be the most interesting and most slippery part of writing.

Ha ha ha! Of course! I like the idea of interviewing your characters … must try that myself!

Now, tell us about your books.

I’ve just released the second in a series of adventures written for teens called Ace Carroway Around the World.

In terms of content rating, it’s harmless. There are a couple of mild cuss words spoken by the grumpy narrator. In terms of plot, well, check this out:

In 1921, in the quiet seaside town of Hyannis, shipbuilder Grant Carroway dies in a hail of bullets. Cynical cop Drew Lucy investigates the case.  When Grant’s know-it-all daughter Cecilia barges into the crime scene, Lucy puts her at the top of the suspect list. Nine times out of ten, murder’s a family affair.
Pilot Cecilia “Ace” Carroway thinks the hit was masterminded by a Great War tyrant she remembers killing. Is the shadowy Darko Dor still alive?
It sounds farfetched to Drew Lucy until he finds himself dodging bullets and grenades. He’d better get wise quick, or somebody else is going to die.
Buy this book if you like: Narrow escapes. 1920s slang. Cool female pilots. Noir detectives. Murder investigations. Explosions. Clipped sentences. Hired thugs. Jazz.

Thanks for joining me here today, Guy, it’s been fun. Oh, and before I forget, you can find Guy’s books on his website, or at Amazon, of course!