Hi Laura! How nice to have you here today, and with a New Release! So, Laura, please tell us a bit about yourself.

I run Gabriel’s Horn Press,  am active in poetry as a member of the League of Minnesota Poets, and routinely perform at local open mics as both poet and musician. I have appeared in The Star Tribune, on Minnesota Public Radio, WCCO, and Channel 12, and hosted Books and Brews with Laura Vosika on AM 950.

I currently live in Minneapolis with 5 of my 9 children, three cats and an Irish Wolfhound much like the Laird’s great hunting hounds.

Thanks for the introduction – sure sounds like a busy life so I can’t imagine when you find the time to write! I can’t wait for you to tell us about your books, but first, please answer three questions to tell us a bit more about you.

Where are your books set. Have you been there or spent significant time there?

The Blue Bells Chronicles is set primarily in Scotland–both modern and medieval–but also partly in Midwest America. I live in the Midwest and am quite familiar with the concert halls, but as to Scotland, I have made five trips there, mapping out routes to as many of the places in my novels as I can possibly get to in two or three weeks.

Five trips isn’t as significant as I’d like, but it has taught me a lot and really brought the land, the history, and the heritage to life in a way we just can’t fully get from internet research.

Take, for instance, midges–a question I wouldn’t think to ask in my research and something that just rarely comes up otherwise.

Or take the chill–in Minnesota, I’ve been known to be out without a jacket when it hits 40 degrees. On my first trip to Scotland, the temperature was hovering around 60–and I was in 5 to 7 layers every day, bar one, because it’s windy and near water.

Although I spent my earliest years in Germany, visiting castles all over Europe, it was also good to get back and experience castles as an adult.

Oh, I love Scotland. I’ve only been there once, but it was magical. We visited the area around Glencoe which is famous for the massacre in 1692. I’m sure everywhere you went would have been rich with history. So, do you write from your own experiences or do you simply sit down and make stuff up?

Well, the music parts have a lot to do with my own experiences. I have my degree in music, I played trombone semi-professionally for years and am quite familiar with the pieces Shawn plays, having played them myself for a long time. I’m quite familiar with orchestral life, rehearsals, concert halls, playing in a big band, and more. Like Niall, I also play harp and make a point of playing medieval music on it, to hear what he would have been familiar with.

As to time travel–I have no experience with that–for better or worse. I have no experience with being a medieval warrior. Still, I wouldn’t necessarily say it’s strictly made up. Shawn and Niall’s stories are very much the stories of human nature (Shawn’s initial character, his search for redemption, his and Niall’s initial scathing assessments of each other, their growth and change), and also of Scotland’s actual history.

As an example–in Westering Home, Book Four of The Blue Bells Chronicles, Niall fights in Ireland with the Bruce. There, he experiences the miraculous birth of the army laundress’s child, on a battlefield as the much larger enemy army looks down on Bruce’s. Despite knowing all his men may die facing this much larger force, Bruce has refused to abandon her. This is a story that has come down to us, reported by John Barbour in The Brus.

What makes you happiest as an author?

The connections I’ve made with others as a result of my writing have made me the happiest. There is my writers’ group, Night Writers. These people, past and present members, have been a very important and wonderful and meaningful part of my life.

There are readers and fellow authors I’ve connected with and become friends with. Among those was my friend Elaine. When I announced on my author page I’d be in Scotland, she invited me to her home–in Dollar, Scotland, in the glen below Castle Campbell. I was privileged to know her and call her a friend and I never would have, had I not written the books.

In the end, knowing that we’ve touched each others’ lives in a positive way is what makes all of us happiest, I think.

So very true–I feel the same way when someone tells me they enjoyed my books or that they were swept into a new and different world by reading them. So, speaking of writing, you have a new release. So, can you tell us a little about your books?

The Blue Bells Chronicles is a tale of time travel, action and adventure, romance and redemption, ranging across modern and medieval Scotland.

Shawn Kleiner is a modern musician, self-centered and arrogant. He has it all, fame, fortune, and women, until the night his girlfriend has enough and leaves him in a medieval Scottish tower. He wakes up in the wrong century.

The series follows the story of Shawn and his medieval twin, Highlander Niall Campbell, in the months and years surrounding the battle of Bannockburn. It is ultimately a story of love and redemption, told against a backdrops of American orchestral musicians and the times of Robert the Bruce and James Douglas. 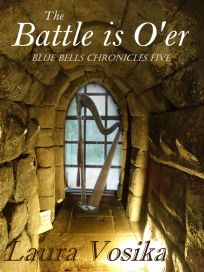 This is the cover for Laura’s latest book, book five of the Blue Bells Chronicles – The Battle is O’er

and all Laura’s books can be found on her Amazon author page.